Fictions was first exhibited in February 2020 at the Cello Factory in Waterloo, London. The exhibition brought together the work of Gary Clough and Isabel Young and drew on synergies between their practice, engagement with narrative and position as painter and sculptor, focusing on how both artists question and challenge traditions and expectations inherent in painting and sculpture.

The evolution of human intellect and material existence can be traced through the endurance of the artefacts left behind. Objects that populate the practices of Clough and Young in Fictions span geological time and many centuries across continental distances. The global products of manufacture and culture that converge in Clough’s drawings battle with ancient rocks and scaled maquettes of Young’s expanded paintings in an interplay that no longer binds objects to their birthplace or taxonomy.
Drawing as an engine for the imagination allows for the ordering or reordering of spaces and things. Draftsmanship in Clough and Young’s work functions as a hypothesis weaving fictional realities and postulating invented worlds. In Clough’s perspectively drawn assemblages, transcription is betrayed in favour of fabrication, where artefacts are combined, hybridized, compressed into a singularity that levels hierarchical value. Young’s works are equally speculative. Despite originating from AutoCAD drawing and the laser-precision of architectural model-making, they remain proposed and unbuilt, as Clough’s remain intangible and unsculpted. Neither the original nor the outcome will ever exist.

Both artists inhabit the inert and hand-crafted universe of the still life – one of nearness, confinement, entombment – where objects accumulate as captives in a labyrinthine mausoleum. Fictions is an exhibition mimetic of a Wunderkammer construction of the mind. Through the conduit of infinite leitmotifs (aeroplanes, machinery, priceless vases in Clough’s drawn vitrines together with the vernacular furnishings and architectural components of Young’s interiors), a narrative and re-imagining multiply in the space of critical scrutiny, subsumed by the production of artifice and fiction. 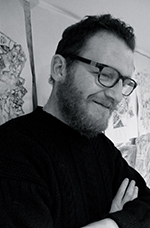