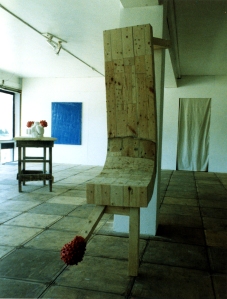 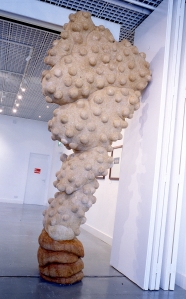 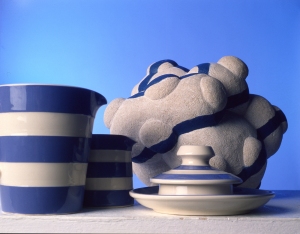 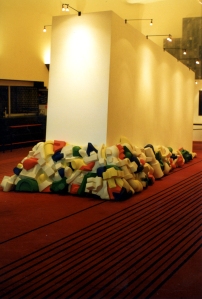 Science Fiction as a genre was enriched by John Carpenter’s The Thing (1982). The film is centred around an alien being frozen in ice for 10,000 years who, once thawed out, is able to impose itself on any organic host and become a part of its living (or dead) tissue. Re-animating itself every time it is contained by the opposing team of isolated, inferior, yet surprisingly effective humans. Each time it picks off another victim or re-invents itself, the director instigates a gruesome and inventive animation sequence, which budget limitations aside, have proved to be a milestone in film special effects.

Gary Clough, demonstrates an ability shared with John Carpenter, to pump a little living tissue into his material. I first saw his work in Brighton, at the Phoenix Gallery in 1994. Guest was slipping through a hatch in the panelled floor, another larger wooden piece, If the Shoe Fits was leaning against a pillar, raising a leg, and a collection of Portland Stone stools, Six Characters, was arranged in a conversational group. The animation of these dumb material masses is made plausible by a series of devices even more audaciously ‘low budget’ than those employed by Carpenter. Many have a surface made of raised pimples, a rash or series of blisters implying a common infection or diseased genetic link amongst them. This commonality is then tested by combining several opposing materials in one single piece. In If the Shoe Fits, the red rubber tip on the end of the single raised leg infers the presence of an embarrassing and sticky inflammation. The main body of the piece is wood, shaped using an intensely laborious process, the rubber is applied to the limb as a liquid that becomes the intrusive element on an otherwise pure material. The Stone Age technology is apparent in its production, making sculpture in this way is no longer necessary at the end of the twentieth century. He uses the expediency of modern composite materials or the usage of power tools, right along the side the heavily crafted elements of stone, bronze and in this case wood.

During his Residency at Falmouth College of Arts, Gary has consolidated his work – ‘Catalyst’ was the outcome, the exhibition he staged in 1995 at the college, in conjunction with Gary Clarke. One of the four pieces making up the show being the lurching, ungainly Floored, one leg pointing optimistically forward in a drunken goosestep. a simplified table-like form, Floored is made entirely from the wooden floor tiles of the type found on a thousand clubland dancefloors. In tandem with this was Lent, an impossible form like a towering exclamation mark, leaning against the wall as if exhausted by its own size and weight. A third piece, Cornish Ware, has proved to be emblematic of his Residency at Falmouth. Made in Cornwall, by an artist from the South East, using a design as identified as typically Cornish, but with pottery made in Stoke on Trent. The display shelf unit supporting the carved Portland Stone elements and crockery is one which could be found in many of Cornwall’s tourist gift shops. The Portland Stone wears its Cornish drag with a sense of resignation, but given the opportunity these elements would have slithered free to wash off their temporary colouring, leaving the pine shelving to the collection of assorted plates, jugs and dishes. This piece was shown in the transferred ‘Catalyst’ at Horsham Arts Centre in Kent, adding to its air of displacement.

‘Catalyst’, in its second venue, benefited from the inclusion of the large scale installation Prop. A wedge of coloured plaster relief mimics an insurgence of simple coloured forms, resembling children’s educational toys, raising the pure white rectangular form to a point where it is no longer credible as a gallery display area. It is this sublimation of the white cube as the Modernist form, that heightens the absurdity of this piece, tilted on an axis which accents the non architectural mound of implied forms. The forms are the unthreatening, bland colours of plasticine, soft and pliable in contrast to the hard edged weight of the white form. The only reminder of the origin of the deposed white form are the lights throwing the plaster panels into high relief and illuminating its own plight.

Isolation, humour, stupidity and vulnerability can be recognised in many of these pieces. By instilling behavioural qualities in his work Gary Clough is giving us an indication that it is the common experience he is interested in. We recognise these conditions as generalities but they still illicit an emotional response. He is taking us to a point where we can then inform our own specific experience. His work is not representative of any particular life condition or of an individual life form, so perhaps it is best expressed in a line from another well known Science Fiction milestone.